What Are Skutt Kiln Error Codes?

All Skutt kilns with KilnMaster Controllers are programmed to generate Error Codes when something goes wrong during a firing. These not only give you an indication of what the problem may be, they also often will shutdown the firing to protect your ware or the kiln itself. When an Error Code is generated it will appear in the display and, depending on your controllers age and the code, trigger the alarm. On older units it is important to make note of the code before you press any key to stop the alarm and clear the code. On newer boards you can go to the Diagnostic Menu and access the ERTF feature to see the last Error Code to occur along with the temperature it occurred at, the amount of time into the firing at which it occurred, and in addition it will run a full Diagnostic test.

Error 1 (E-1) is the most common Error Code that your kiln will display. It is telling you that the kiln does not have the power to rise in temperature at a minimum rate. This Error Code is triggered when the kiln cannot rise in temperature by at least 12°F/hr during a Heating portion of a program (if it happened during a Hold or Cooling portion of the program you would get a different Error Message). This slow rate must persist for at least 22.5 minutes before it will trigger the error. For some reason your kiln is unable to generate enough power to achieve the heatwork you are asking of it. The most common causes of E-1 errors are failed relays, worn out elements, broken elements or voltage issues.
If you do not have access to a meter that can read voltage and resistance it is sometimes difficult to determine exactly which of these issues is causing the problem.
Failed Relay
The power to your elements is regulated by your relays turning on or off to achieve the desired heating rate. Like the brake pads on your car, these relays have a limited life and will eventually need to be replaced as part of regular maintenance. Your kilns controller reads the temperature from the thermocouple and, based on the program you are running, tells the relays to cycle on or off to achieve the proper heating rate. Most KilnMaster Kilns use mechanical relays which are rated for hundreds of thousands of cycles.This seem like a lot but depending the programs you run and how often you fire you could easily hit this range in several years of firing. Excessive heat, loose connections and dust build up can severely reduce the potential life for relays.For most Skutt Kilns each relay controls 2 elements or one section of the kiln. When a relay has failed in the open position (off) that section it is controlling will not glow when the kiln his heated to 800F. A section will also fail to glow if an element is broken in kiln designs where 2 elements are wired in series. This makes it difficult to diagnose whether the Error one was caused by a bad relay or a broken element just by a visual test. One thing you can do is to switch the relay controlling the section that is not glowing with a relay controlling a section that is glowing. If the problem follows the relay, than it is a bad relay and needs to be replaced.Since relays normally have similar cycle lifespans, most people will elect to just go ahead and change out all the relays at once. When you are changing the relays check for tight connections and damaged connectors and/or wires. It is possible to replace a relay and have it burn out prematurely from a poor connection. This brings up another good point. If you feel your relays are not getting the lifespan they should, look for the root of the problem. it is usually associated with excessive heat caused by poor circulation or bad connections. Long hold times will also cause more cycling and therefore fewer firings between relay changes.
Relay Replacement 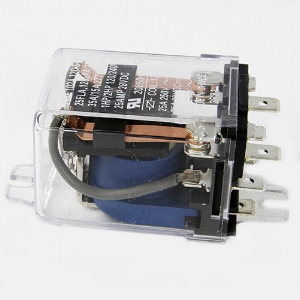